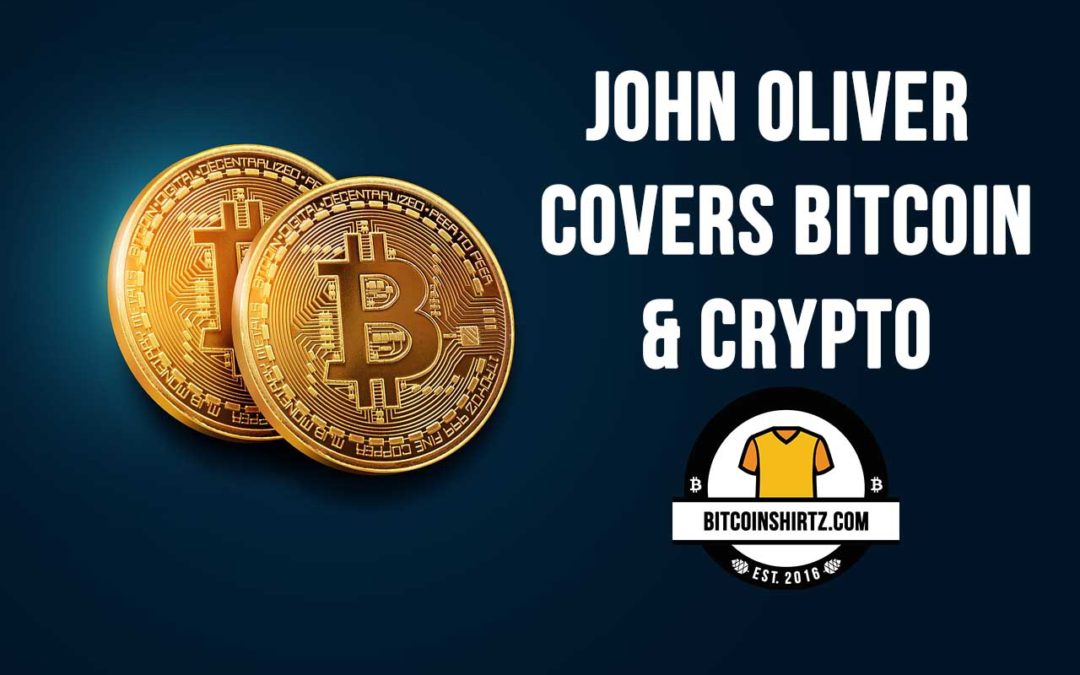 John Oliver is an English comedian, writer, producer, political commentator, actor and television host. He is most known for is work on The Daily Show with Jon Stewart and now he is making a name for himself on his very own show on HBO called Last Week Tonight.

Quite recently he released an entire episode covering Bitcoin and cryptocurrencies.

Oliver does a great job aggregating information to explain Bitcoin:

“I’m a virtual currency, worldwide, that you can send for little to no fees, open source, not controlled by any government, corporation or individual. It’s financial freedom BRO!”

He even brought on Don Tapscott, author of Blockchain Revolution: How the Technology Behind Bitcoin Is Changing Money, Business, and the World, who spoke on the security of blockchain technology:

“A blockchain is a very highly processed thing like a chicken mcnugget and if you wanted to hack it it would be like turning a chicken mcnugget back into a chicken. Now someday someone will be able to do that but for now it’s going to be tough.”

We commend John Oliver for covering Bitcoin and cryptocurrencies, which we believe are the future of finance and data recording.

For much of the episode Oliver focuses on responsibility when investing in cryptocurrencies telling viewers to not invest any more than they could afford to lose, which is a pretty standard phrase in any financial market. But still good advice.

John Oliver also hones in on the EOS project, which he clearly does not understand. He reads off the initial coin offering numbers scoffing at how much value the EOS team has raised. Oliver also doesn’t understand Block.one’s obscure mission statement and relationship to the EOS blockchain. Launching a cryptocurrency that competes against state created fiat currencies is highly illegal according to governments. Block.one does not want to be held directly responsible for the launch of the decentralized network. If governments could find out who Satoshi Nakamoto is, you had better believe they would kill him.

Watch the episode below:

Block.one’s CTO Daniel Larimer has previously built and deployed two of the most used (and “usable”) decentralized applications to date. Having originally worked on the development of Bitcoin and feeling it would not adequately perform, Dan developed a scalable high performance Blockchain architecture, now widely known as Delegated Proof of Stake (DPOS); today DPOS processes the majority of all blockchain transactions globally.

Block.one believes Blockchain technologies have the potential to become the next mainstream infrastructure for communication and commerce, and can introduce new freedoms while streamlining compliance and universal interoperability. The company is committed to the technological and regulatory innovation required to push forward on common ground for developers, users, businesses, and regulatory agencies around the world.

Block.one and community contributors make continual progress on the development of the EOSIO platform that can be viewed on the EOSIO Github, a fully transparent hub where the real time progress of feature creation through to completion can be viewed and contributed to.

They then discussed Brock Pierce, who is now moving on to independent community building and investment activities. In short the Block.one crew has no hard feelings and is thankful for his contributions.

They went on to say:

As a growing company building value through an open source community as opposed to traditional avenues of proprietary software ownership, we are conscious of the importance of robust corporate communications. We take professional standards seriously and are always focused on raising the bar as our company transitions from startup to aggressive growth. We value acknowledgment of room for continued improvement and remain confident in our mission to further the impact of Blockchain as a foundational technology.

Thanks again for the entertaining reminder to stay informed when it comes to new industries, concepts, and people.

Your fans at Block.one

P.S. If you’re interested in blockchain based Beanie Babies, we recommend exploring #Cryptokitties 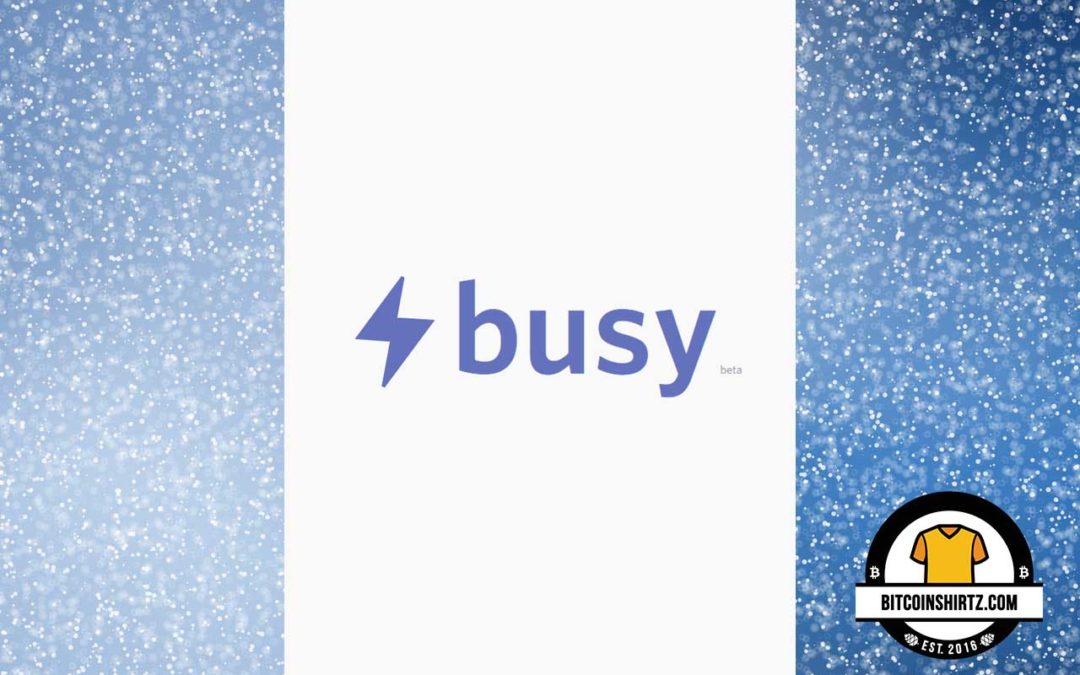 Busy.org Takes The Steemit User Interface To The Next Level

Busy.org is one of the best ways to post on the STEEM blockchain. The open-source project is an alternative Steemit user interface. Steemit.com is the most well known website or block explorer and is just one way to interact with the STEEM blockchain.  Front-end interfaces allow users to see notifications for mentions, new followers, comments, and upvotes.

The STEEM price is featured on the side in a very clean interface. Vote power and upvote worth are also seen on the account homepage. Posting is made easy with their built in editor, wherein you can save multiple draft posts. Users can get a free upvote from the Busy account for using the busy tag.

Busy created its own page to monitor your activity, you can easily filter by criteria that you specify. You can also easily search through your historical activity

Whenever a post is about a specific cryptocurrency, Busy.org will recognize the crypto name of the coin and list the current price to the left of the page.

Busy now has a referral program. You can find your shareable link in the settings on Busy. You can share it to receive a 10% of post rewards for 1 month from the new Steemians who you bring on. 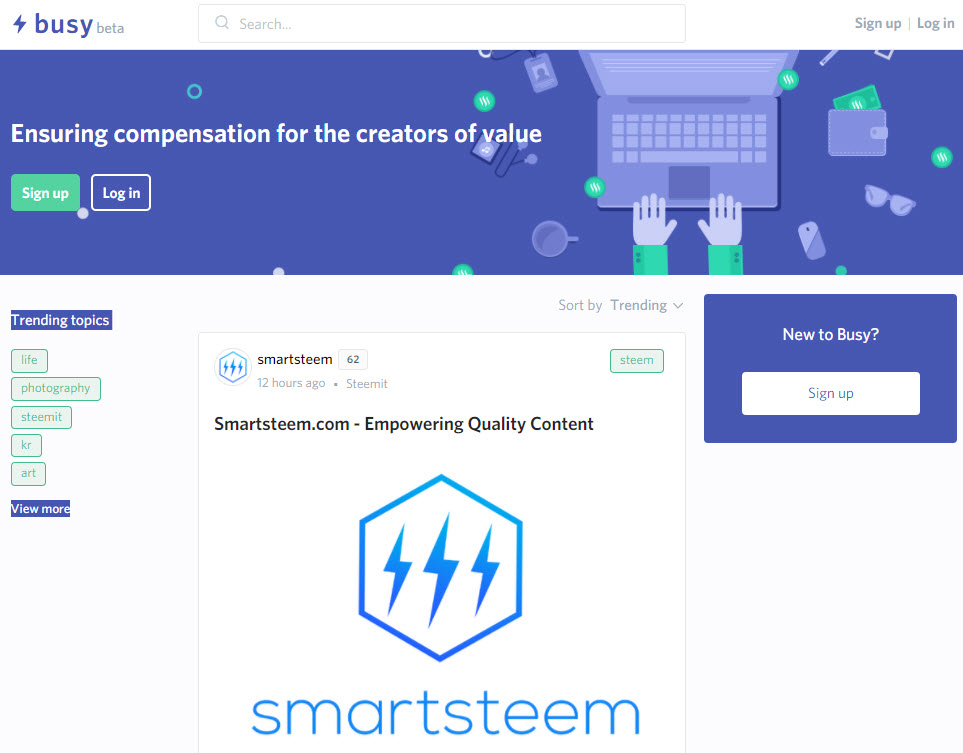 At Busy.org, “we believe in wisdom of the crowd, open decision-making, taking a collaborative and transparent approach, that’s why all our work is open source. Everyone is free to contribute, by all appropriate means to accomplish our mission. Not only coders but also designers, writers, translators, testers, marketers, advisors, etc. We’re partnering with @utopian.io to incentivize and reward open source contributions on Busy.org.” (Check on Utopian) 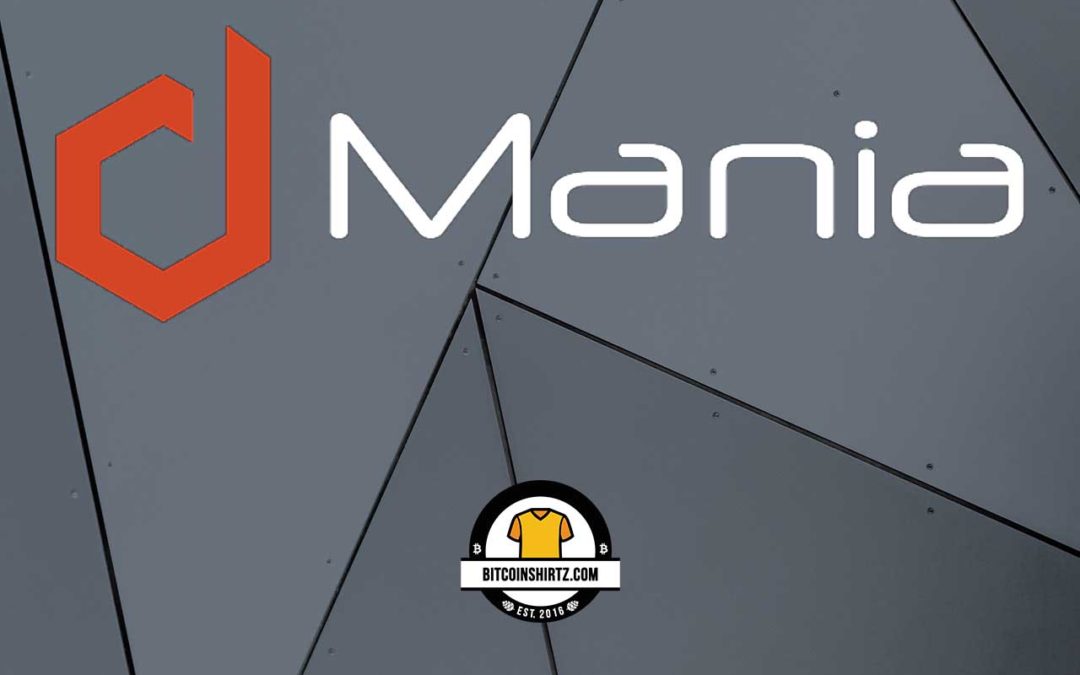 New STEEM App, DMania To Compete Against 9GAG And Other Meme Sites.

DMania is one of the newest apps on the STEEM blockchain. The project aims to build a website to compete against 9GAG and other internet meme sites.

9GAG is popular online platform and social media website for collections of Internet memes. It was launched back in 2008.

There are heated debates on Steemit right now about DMania being a positive or negative for STEEM. Is DMania for plagiarism and stealing others original work or creativity or harmlessly sharing images and data online?

Are jokes worth money? The comedians who make a living making people laugh would say yes.

We Think DMania is a cool and interesting project in the Steemit blockchain ecosystem. We shall see if it gains traction and attracts high volume of website traffic. 9GAG certainly does.

Other STEEM Apps Worth Checking Out

D.Tube is the first crypto-decentralized video platform, built on top of the STEEM Blockchain and the IPFS peer-to-peer network.  D.Tube is a great alternative to YouTube for content creators and they get paid in STEEM!

Because of the decentralized nature of IPFS and the STEEM blockchain, D.Tube is not able to censor videos only users censor through the power of upvotes and downvotes.

Busy.org is one of the coolest apps for STEEM blockchain. We highly suggest it. The latest release allows for DTube videos to embed in posts on Busy.

Busy.org is an open-source social network and communications platform that includes a variety of rich features and functionalities.

An open platform for an apps ecosystem: Busy’s goal is to build an all-in-one platform and allow many apps and features to flourish on top of the Busy social media platform. We are offering an open-source and secure social network layer to bootstrap any Apps (like Facebook Apps does, or WeChat services), games, community tools, marketplaces for good or services, using Steem.js API, SteemConnect and the Busy.org ‘framework.’

An open-source project and vision, and an alternative interface to Steemit.com: we believe in wisdom of the crowd, open decision-making, taking a collaborative and transparent approach, that’s why all our work is open source. Everyone is free to contribute, by all appropriate means to accomplish our mission. Not only coders but also designers, writers, translators, testers, marketers, advisors, etc. We’re partnering with @utopian.io to incentivize and reward open source contributions on Busy.org. (Check on Utopian) 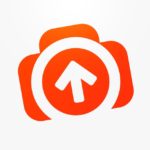 Steepshot is an open source Web app for lifestyle sharing based on Steem blockchain. It’s similar to Instagram, but you post on the STEEM blockchain. Check out their Steemit Page or visit steepshot.io 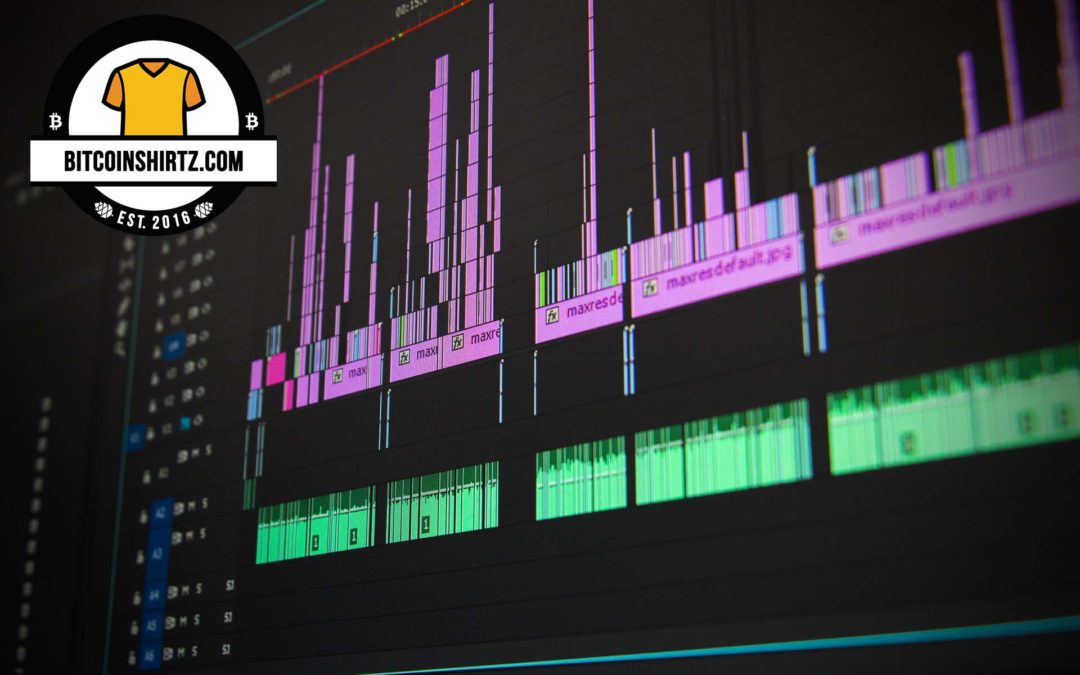 Tech companies aren’t the only one launching blockchain tokens these days. Music artists are now utilizing blockchain tech to protect their work and earn revenue without labels and banks.

On November 10, 2017, Gramatik launched his own blockchain token called GRMTK. He released 25 million GRMTK ERC20 tokens on the Ethereum blockchain.

Gramatik – ” I waited for the release of a platform like SingularDTV that uses Blockchain technology to pass me intermediates. I just want to get my music out when I want and on my own terms. I want to get rid of all this bureaucracy. I just want to make music. In a world that belongs to banks and businesses, Blockchain technology is pretty much the only thing that gives me hope for the future. ” source

Want to launch your own blockchain token?

There are several ways and several blockchains you could consider for launching blockchain tokens and initial coin offerings. If you ask us, we say wait till the EOS launches this summer and build it on that blockchain platform.

Ethereum is another popular blockchain platform for tokenization. There are currently over 510 ERC20 tokens on Ethereum.

STEEM is also coming out with SMART MEDIA TOKENS for content platforms to tokenize with a stake weighted voting system like Steemit has. 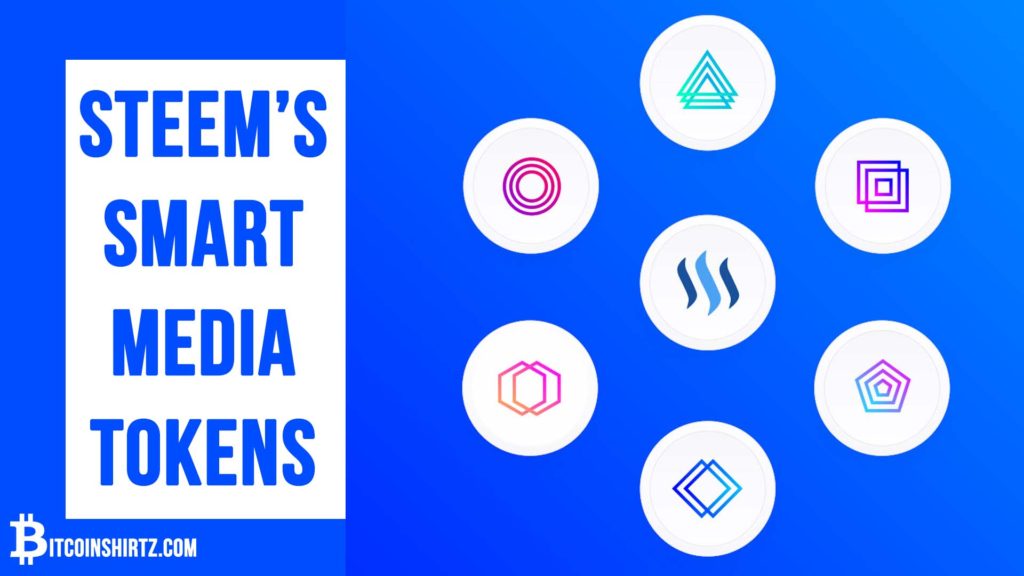 You could also check out Token Magic for comprehensive white glove service for end-to-end token sale solutions with proven success. 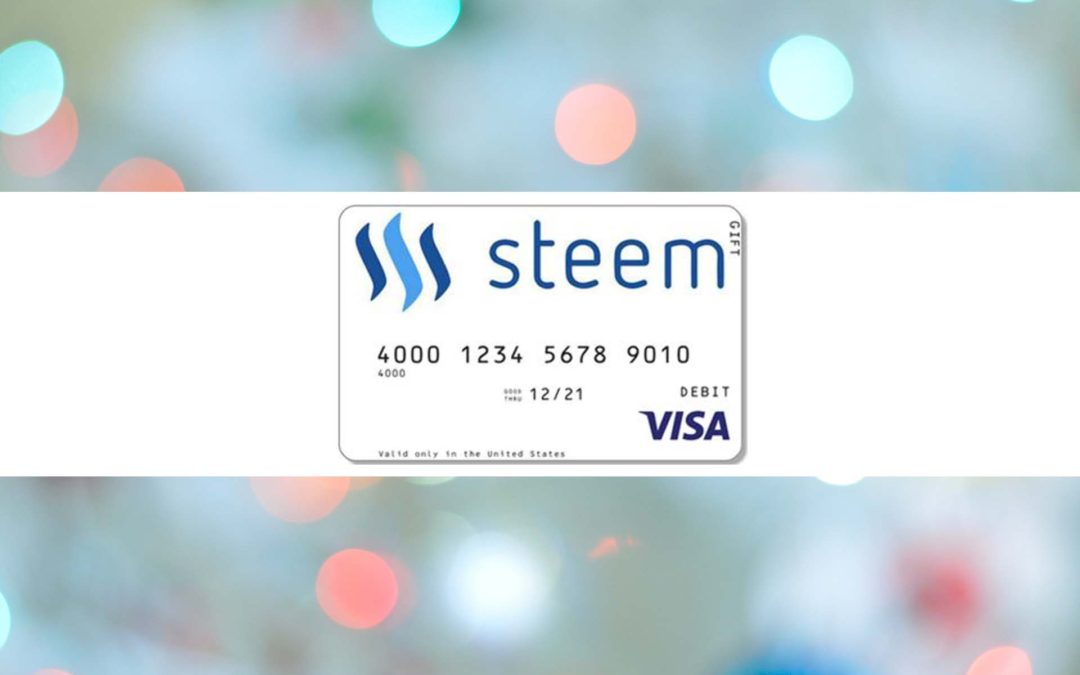 How To Buy Gift Cards & Visa Cards With STEEM

Steemit is a wonderful website that allows content creators to earn cryptocurrency for their posts. STEEM Cards is now open for business, and you can purchase gift cards and Visa cards with STEEM, or STEEM Backed Dollars! You can also use BTC ETH and LTC.

This is very exciting for the people working very hard on Steemit to produce top quality content. Exchanging crypto for things you need just got way easier thanks to STEEM Cards.

More on Steemit and why you should join if you haven’t : 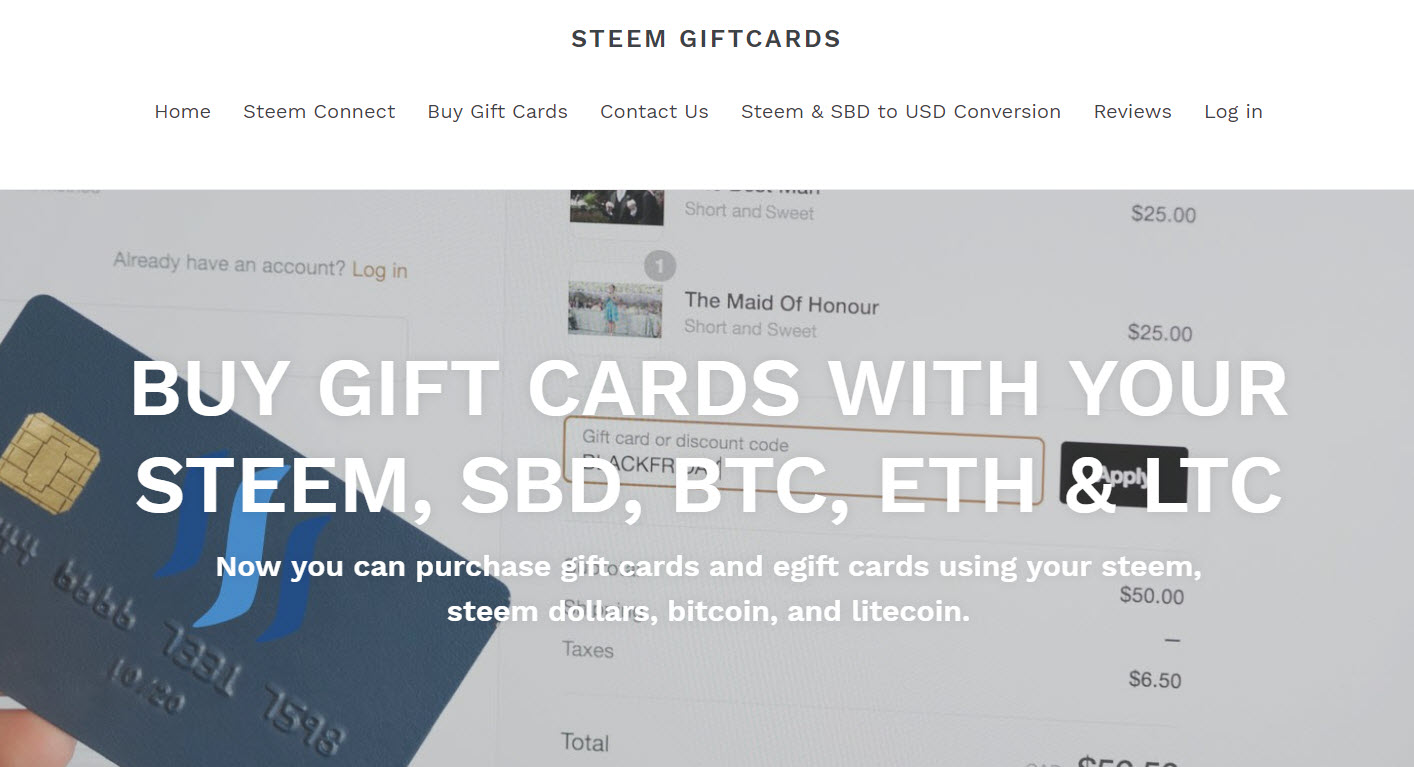 “SteemConnect is the ideal solution for making it easy and safe for users to sign in to 3rd party Steem applications and for developers to build and scale these applications. It’s a layer built on top of the Steem blockchain that allows you to connect to authorized apps and transact in a secure and convenient way.”

SteemConnect won’t just be a layer that streamlines the user sign up and sign in processes, it will also enable developers to add Steem features to their existing websites. Using SteemConnect, web developers with no history of blockchain development will be able to conveniently and securely add features like: tipping, voting, and comments. 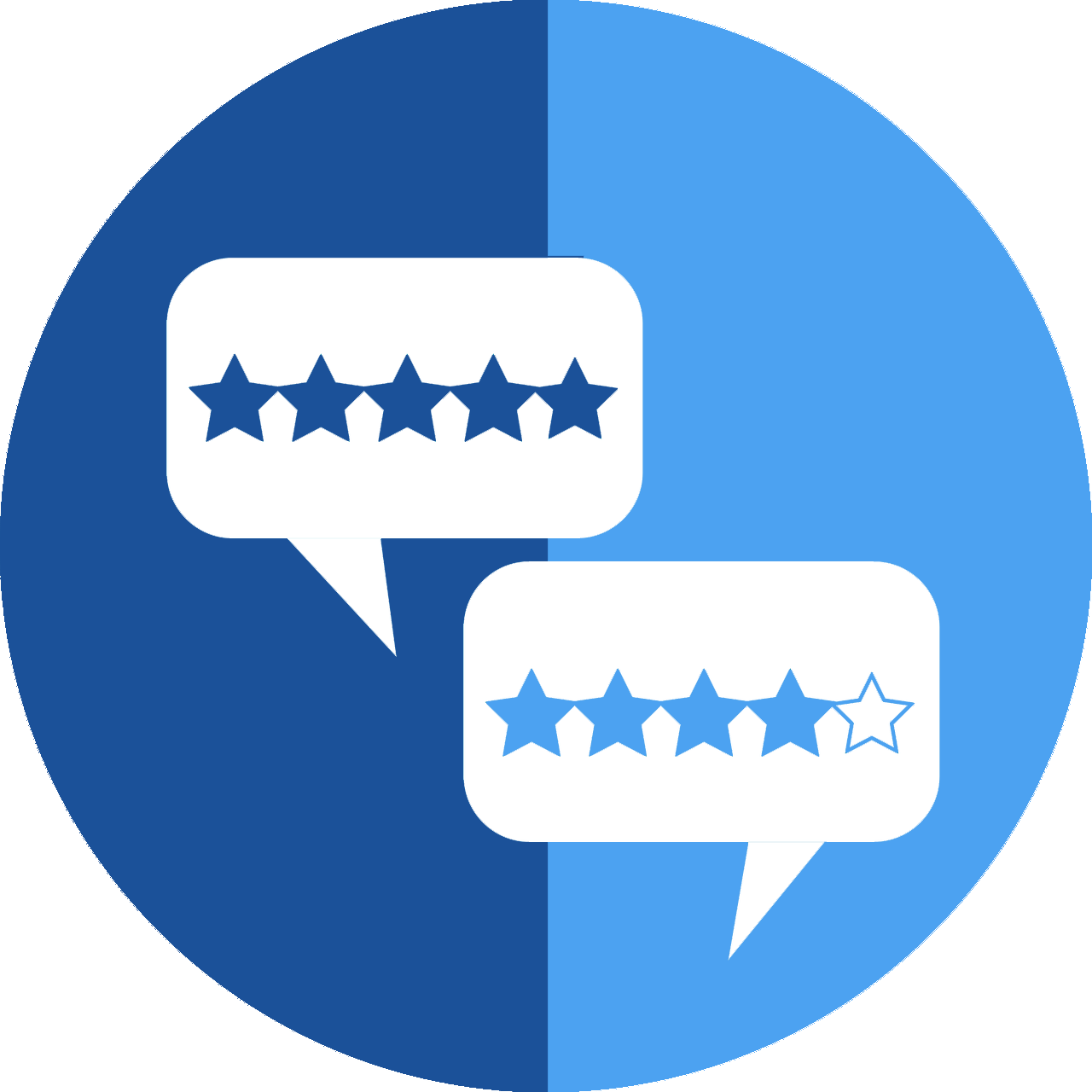 “Need an easy way to use your magic internet money in the real word without the use of a bank account? Try Steem.cards! Oh nothing just eating pizza I got with my Steem Visa card in the USA”

“I tested out Steem.Cards today, and It’s awesome.”

“Buying Asparagus, Sunchokes, Groundnuts With Steem! | My Experience with Steem.Cards”